Construction of 110 kV power line of Armenia by Gam

In the official tender for Armenia’s 110 kV power transmission line project, among the selected companies from the six applicant countries, Gam has been announced providing the best technical, financial proposals and the Winner.

According to Gam’s Public Relations, on August 3, 2016; the contract for the 110 kV   Novemveryan to Lalvar, Overhead Transmission Lines in Armenia ,was officially announced to the company; then on August 11,2016; during a ceremony attended by officials from the Ministry of Energy of Armenia as well as officials from the I.R.I Embassy ; was signed by Mr. Aram Ananian, Managing Director of Armenian CJSC ( High Voltage Electric Networks) , as an Employer, and Mr. Nasrollah Rahnama, the Managing Director of the Gam Arak Industrial Company.

It is worth mentioning that the EPC contract includes: design, equipment supply, construction, stringing and delivery of 27 km of 110 kw single-bundle, dual-circuited line, that it’s design and coordination process has been completed up to now. Its implementation operations have also begun since the end of April 2017.

The contract deadline has been set for 20 months after the key to project on (September 22, 2016). 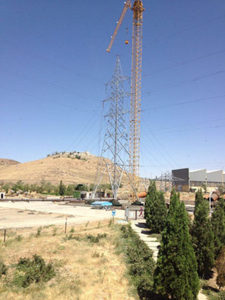